Is bioenergetic testing too much of a burden for the therapist?

Results of a survey conducted by natural health professional Baklayan on his colleagues on bioenergetic testing:

Dear Colleagues:
thanks to the numerous replies to my questionnaire, we were able to clarify this important question for us. (We are interested in additional testimonials.)
Today I want to announce to you the preliminary results. There are still questionnaires coming back sporadically, and I hope you have completed yours, in case you have not sent it to us so far. After announcing the results, it is understandable, that an unconscious impact on the answers would take place.
Quite a few of my colleagues were so touched about the fact that “finally someone addresses” that in addition to the questionnaire they have sent me very encouraging emails and comments, in which they have described in detail the complaints they suffered from through the usage of the bioresonance testing. At this point a special thanks to these colleagues.
Here are some excerpts of these comments:
I have reduced, and had to reduce more…
– I am totally exhausted…
– I am trying to shirk from the tests…
– I feel exactly as described in your letter…
– Since I have stopped testing with the device, I am getting better every day…
– I only work 40% of what I used to, now I feel better…
– The complaints have come slowly and became stronger over the years…
And so on….

I also received very good and well-meaning advice from many colleagues on what I should do to protect myself during the tests, or to again neutralize the negative effect every night or every week. Among them there were some very interesting and reasonable proposals, some very esoteric, most of them were, of course, known to me, and some I had already tried. Again, I am very grateful for the well-intentioned advice, which was perceived as very worried and very sincere.
And that brings us to the core of the issue, dear colleagues. When we carry out an activity that requires performing a special protection measures, energy work, or applications daily or at regular intervals, you can safely say that there is something wrong with this activity, and it only confirms my suspicion that here was a profound problem.
Am I ready to pursue an activity for life with the knowledge that it is energy-consuming and even hazardous to health, which is why I am compelled to constantly apply equalization methods that sometime no longer work, as it is well known?
The answer to this question I leave to you.

Some therapists made me aware that due to the sometime even severe health problems they themselves came to the conclusion that it cannot go on like this, and that is why they switched to devices with automatic testing, or devices that operate without any electricity or magnetic field generation. I will come back to this later.
I also want to thank these colleagues for their confirmation. It is beyond the scope of this lecture by far, to discuss automated testing methods in detail, especially, since there are a lot and very different devices on the market. From my seminars most of you know how I proceed to test these devices and that none has yet passed the test. This does not mean that there are no such devices, and I am very willing to be convinced by respective colleagues.
Colleagues working with automated testing methods, of course, I had to exclude from the survey, since they do not test the loads bioenergetically themselves, but only connect the patients to the device, and the machine does the rest. The objective of the survey certainly was to determine the load caused by bioresonance testing.
Incidentally, it is a pity that these colleagues have not filled in the questionnaire according to their condition before they have switched to automatic testing procedures. This would have allowed the survey results to certainly look worse.
Some colleagues are working exclusively with the pendulum without any equipment. They had to be excluded for the same reasons.
Nevertheless, provisionally we have more than 120 questionnaires to evaluate.
At this point I would like to emphasize again that this has nothing to do with the application with the bioresonance devices (and the bioresonance itself). For me, the successes that we achieve are irrefutably, and I remain a supporter of this application process.

For certain, this is our most important result: 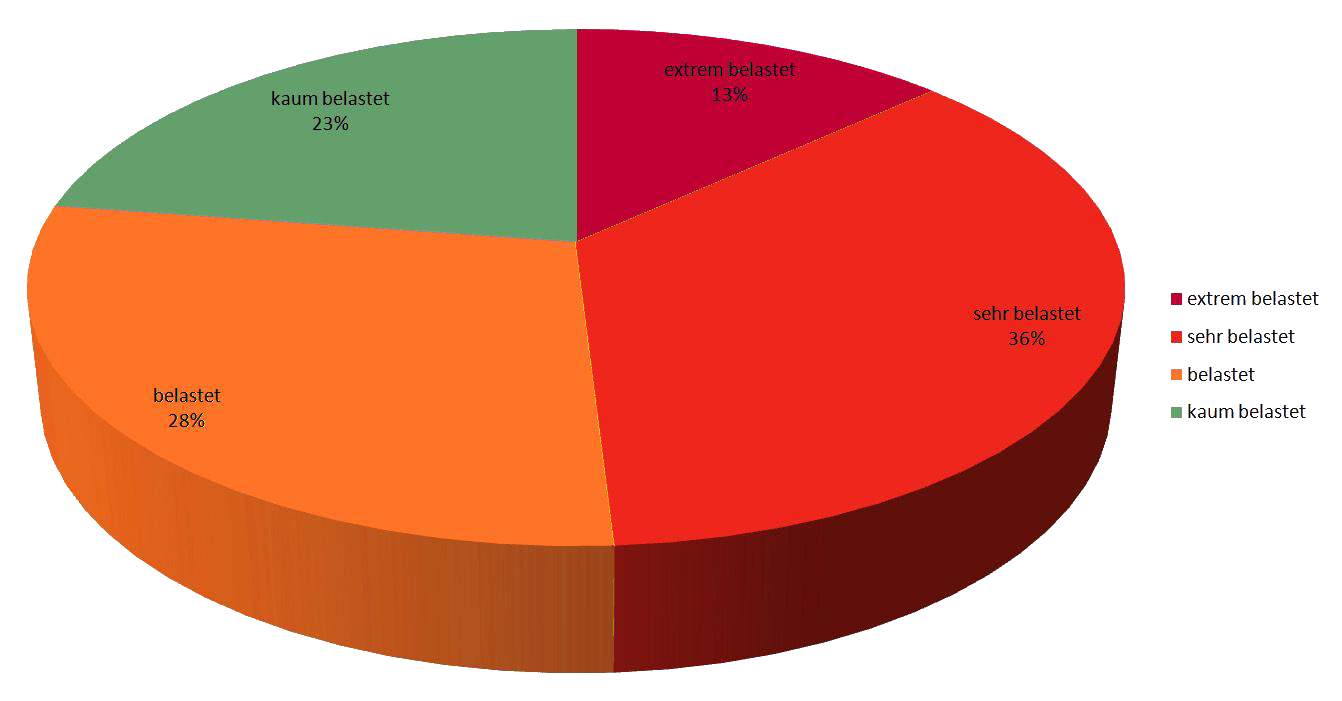 It can easily be seen that only:

– 23% survive this activity relatively carefree, it being understood that no distinction was made with respect to the length in years and the daily time in hours.
– 28% are loaded, but can still compensate this load. In the long term, it is already concerning in this case.
– 36% are very loaded and can no longer compensate the load
– 13% are basically in a condition that would require to immediately stopping this activity.

Now, with this issue, I want to announce the results of my own research of the recent years.
After all the measures taken, did not really help permanently, I intensively watched my energetic state during testing, after I had fully charged with special energy techniques.
I repeated these observation sessions very often.

It occurred to me the following: every time we test, we take a piece of information, you could also say a charge (traditionally an allergy, an environmental toxin or a pathogen) and test them on the patient with an Ai charge, which occurs to the patient, who must play the role of resistance, so that in case of a resonance between A and Ai a zero line occurs. In this process of charging and discharging the tester therefore plays the role of grounding, i.e. neutralization (even if the Biotensor has to be between it).

Suddenly it was clear to me that in bioresonance we are working with charges. We charge information to the patient in order to achieve some beneficial therapeutic effects. Ultimately, this is the reason why in patients with acute Yang states we succeed much faster than with chronic degenerative diseases. Patients with an allergy have an excess of responses and with an opposite charge, these can be neutralized. The energy is present.
In patients with a chronic degenerative disease, i.e. in state of exhaustion, cold conditions and their symptoms this is much more difficult because the body no longer has the strength to work with this charge, for example, to excrete an environmental toxin.

At this point I must conclude this lecture with the results of our survey; with the statement that, in my opinion, there is no solution, as long as you are working with electric or magnetic fields.

This statement is supported by:

1. the survey
2. the testimony of colleagues, who work with different devices without magnetic or electric fields or with automated testing, and their statement, that they were used to be very impacted by bioresonance testing, but no longer after using these various devices.
(This is regardless of whether these devices are therapeutically effective or not.)
3. my personal experience